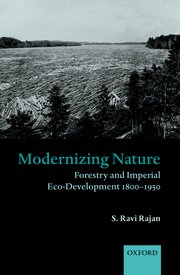 This book provides historic background to contemporary forest use conflicts. It, and other publications in its wake, constitute the first systematic attempt to map the intellectual continuities between continental Europe and the rest of the world, on the contested legacies of modern, state based, natural resource management agendas.

“Ravi Rajan has provided an important genealogy of colonial forestry practices showing that the rational, optimistic, science-based scenario o
f sustained-yield forest management was inescapably based on a denigration of allegedly “inefficient” folk uses of the forest, whether by German peasants or Indian farmers and tribals, to justify enclosures and removals.”

“This impressive book is appropriate for adoption in upper-division undergraduate courses and graduate seminars. Anyone interested in human dimensions of resource use, colonial environmental history, political ecology, or resource management will find it particularly rewarding. Rajan’s book is clearly a scholarly and significant contribution to the literature.”

“What is impressive about this study is the manner in which it details how the transnational community formed and stabilised throughout the 150 years between 1800 and 1950… Apart from its obvious relevance to environmental historians, this book could also make a contribution to historical geography, regional development and colonial and postcolonial history.”

“His observations are illuminating, particularly when read against the background of an anthropology of science.”

“Rajan identifies a series of historiographical gaps, including the neglect of scientific communities, institutions and the discipline of forestry; insufficient consideration of the ‘historical baggage of agendas’ stemming from the science of forestry’s European past; and a failure to understand forestry as a ‘pan-colonial phenomenon’. In tracing the trajectories of ideas, personnel and practices relating to forestry from Prussia and France to India, then to other parts of the British Empire, and finally back to the British Isles, Rajan does more than address these gaps: he makes a contribution that goes well beyond the history of imperial forestry to illuminate wider questions of empire.”

– Zoe Laidlaw, The English Historical Review, 2009.
“valuable not only to historians but also to practicing foresters and other interested in issues like land use.”

Sustenance, Security and Suffrage: A Theory of Environmental Human Rights.

This is a book manuscript in the final stages of editing for publication.

For two videos of public presentations on this project,

With some noteworthy exceptions, scholars and theorists in environment studies, on the one hand, and human rights, on the other, have tended to be kindred spirits rather than active collaborators. There have been very few systematic, comprehensive attempts at bringing these significant traditions of thought into conversation. The purpose of this book is to address this important gap.

Environmental justice advocates in the United States, and social movements in the global south have for long argued that the quality of the environment in which people live is as fundamentally an issue of fairness, justice, and basic human rights, as are questions of wages or rights. This is so because the nature of a human being’s living or working environment has potential to either augment or diminish their net quality of life. In essence, the point is that either the absence of good environments (the problem of sustenance) or the presence of bad environments (the problem of security), produces environmental injustice and, in case after case around the world, human rights abuses. Further, the problems of sustenance and security are augmented by the disenfranchisement of people by existing political and economic institutions, creating a broader problem of suffrage.

The book has three components: a) a historicized taxonomy of the various issues involved in the claims about sustenance, security, and suffrage (SSS); b) a philosophical discussion of the idea of environmental human rights, drawing upon the intellectual history of social, economic, and political thought since the eighteenth century; and c) a normative section on the applicability of the SSS framework for public po
licy.

Engineered Conflicts: The Environment and the Politics of Expertise in Modern India

This manuscript is based on research done with funding with the National Science Foundation, and will be readied for press after Sustenance, Security and Suffrage is in press.

The book, which is being written for a series on infrastructures by MIT press, and now in its final stages, addresses the politics of expertise in environmental governance in contemporary India. It begins with an exploration of conflicts over two natural resources: forestry; and water – with an emphasis on canal irrigation, and dams. It moves on to examine the governance of environmental risks in India – on topics ranging from the controversies over environmental risks and public health since the Bhopal Gas Disaster, to debates surrounding emerging technologies, such as GMOs, Nanotechnology, and Nuclear Power. The underlying analyzes emphasizes what the book terms ‘the infrastructure of expertise,’ – from its political economic bases in the case of natural resources, to its deficiencies or absences in the case of risk. In doing so, the book also examines the role played by scientific and policy experts in environmental governance, and their relationship with lay citizens. The book concludes with a discussion of what it terms ‘missing expertise’ and the infrastructures of expertise and management needed to tackle the difficult environment – development problems of modern India.